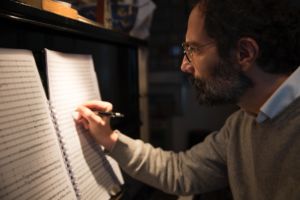 Nicola Campogrande, born in Turin, Italy, in 1969, is today regarded as one of the most important Italian composers.

Since 2017 his music is published exclusively by Breitkopf & Härtel.

After graduating from the Conservatories of Milan and Paris, he began to develop an original personal style, combining past and present traditions on a fascinating new path. Performing his scores, such musicians as Gauthier Capuçon, Riccardo Chailly, Lilya Zilberstein, Mario Brunello, Roberto Abbado, Josep Vicent, The Saint Paul Chamber Orchestra, The Orchestre National d’Île-de-France, ADDA Sinfonica, the Fine Arts Quartet or the Quartetto del Teatro alla Scala have appreciated the freshness and the vitality of his music as well as his ability to touch the heart of the listeners.

He also developed a rich orchestral and chamber catalogue.

His music is recorded on more that 35 cds (from DECCA to independent labels) and it is performed frequently in the most prominent halls of many countries, like the Royal Albert Hall and the Wigmore Hall in London, the Teatro alla Scala, the Opéra Royal de Wallonie in Liège, the Werner Hall in Cincinnati, the Philharmonie and the Unesco Auditorium in Paris, the Auditorium Santa Cecilia-Parco della Musica in Rome, the Rudolfinum in Prague.

The artistic director of the MITO SettembreMusica festival, Campogrande is also a host on Italian RAI Radio3 and he produced the TV program “Contrappunti” on the Classica HD Channel. He writes on the cultural pages of the newspaper Il Corriere della sera.

He has been a member of the International Music Commission of the European Choral Association – Europa Cantat, where he’s now Advisor.